Khor’s Land is a throwback to the days of traditional sword-and-sorcery fantasy. It contains many of the essential elements of the genre – a quest, a three-person band of adventurers and fantastical landscapes. The old-fashioned structure of the narrative is driven home by the first few pages. At first glance, they appear to be exposition-heavy; in fact, they are deliberately crafted as an introduction akin to those found in vintage fantasy movies, video games and cartoons such as He-man And The Masters Of The Universe.

Despite its many retro aspects , Khor’s Land continues the trend found in more recent fantasy comics such as Rat Queens – that of giving the characters modern-sounding names and anachronistic dialogue. This serves to make the genre more accessible to the modern reader although some traditionalists might find it jarring. However, this modern dialogue turns out to be relevant to the story’s conclusion.

Marcello Bondi is wise enough not to clutter the narrative with unnecessary dialogue and keeps the plot moving at a brisk pace. This streamlined style of writing is a pleasure to read. One of the book’s central themes is brotherhood and co operation; again and again, the main protagonists overcome daunting tasks by working together. It’s a refreshing antidote to antisocial swordsman found in many sagas. 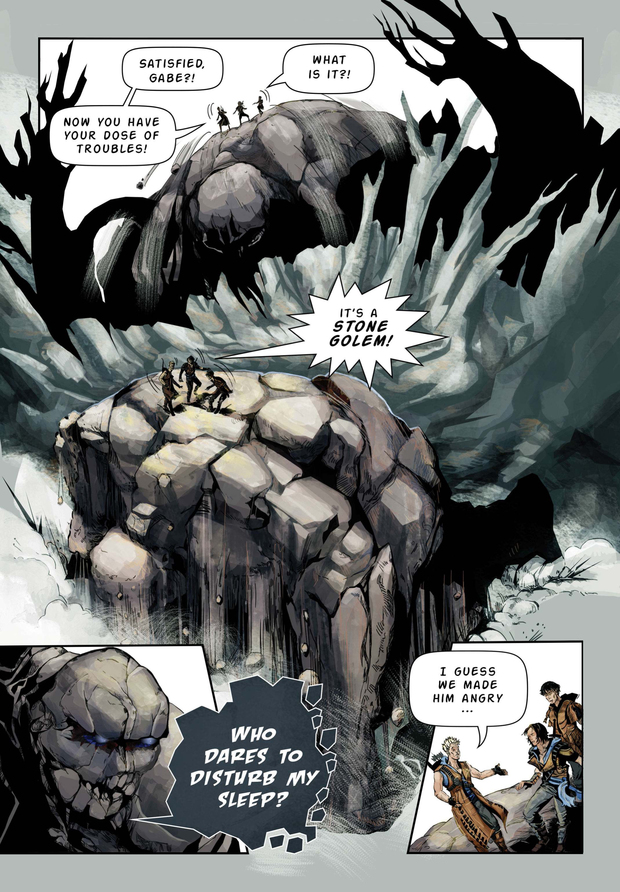 The art is both pretty and easy to follow. Lushly painted with a fresh clean palette, it reminded me strongly of Stephanie Hans’ work in Image’s Die! I actually felt the the illustration style of Khor’s Land worked better within the context of sequential story telling. The combination of a painterly coloring approach with outlines made it easier for me, as a reader, to follow the action and expressions of the characters than those depicted in excellent but more expressionistic style used in Die! Alessandra Imperio’s panel layouts are among the book’s highlights. Dynamic and fluid, they work well in a variety of scenes ranging from a spectacular battle with a griffin to conversations between characters.

Without giving too much away, the ending itself acts as a clever deconstruction of certain tropes. As a long-time fantasy addict, I thoroughly enjoyed Khor’s Land and highly recommend it to other fans of the genre.