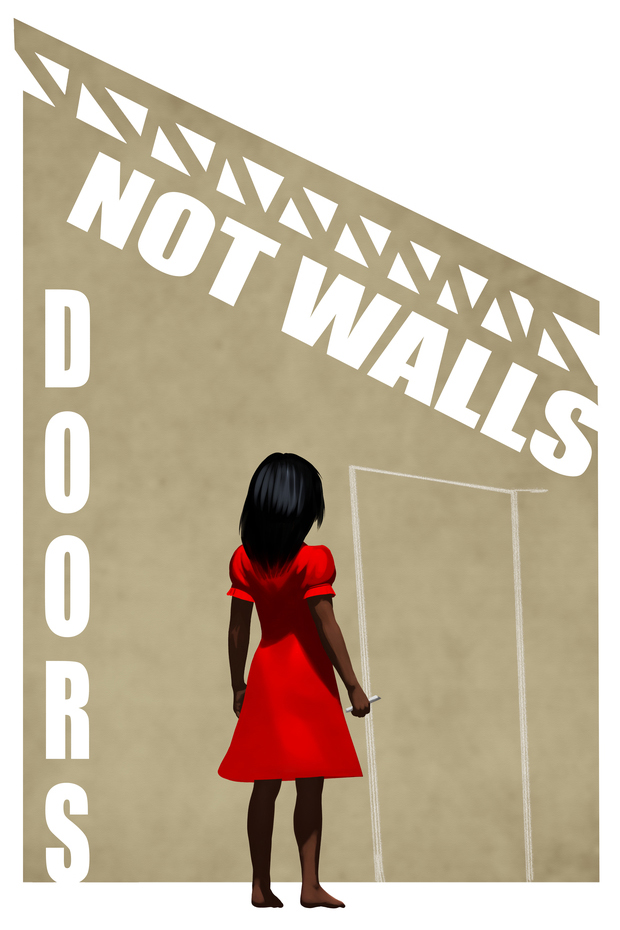 1. Can you tell us a little bit about the Borderx project? How did it originate?

Mauricio Cordero: Honestly, it originated out of frustration. The policies on immigration in the United States have gone through fluctuations the last 500+ years, but the nation seems to suffer from memory loss. I did not think we could regress to the point we find ourselves in today in just 3 short years. I decided to stop whining and get busy using comix as a tool for civic engagement and resistance.

2. On the website, it clearly states that the project is not about focusing on certain politicians but instead aims to bring attention to the difficulties experienced by migrants. Do you feel that politics and ideological  conflicts between supporters of different political parties often overshadow human rights issues?

MC: Yes. The partisanship in the U.S. and around the world has led to a political tribalism where citizens will vote themselves into a worse situation just to toe the party line. The fear of immigrants is easily stoked by the extremist rhetoric of those who don’t acknowledge that they are themselves migrants. Between 15 and 50,000 years ago is when the first humans arrived in the Americas. We all came from somewhere else.

Current ideologies divisions would wither if people were unified, so those in power believe they must stoke the embers of “difference” and “discord” to keep their political tribes fearful and dependent. The right believes that those who do not resemble themselves are a threat. The left believes those on the right are idiots and that they just need to formulate a logical and coherent argument. This stalemate guarantees that the two parties remain in power for fear of losing out to the “other side”.

3. What are some of the aims of the Borderx project? Is it solely to raise awareness or are there additional goals?

MC: To raise money for The South Texas Human Rights Center which is doing essential work on a shoestring budget. To create a teaching tool for schools and other programs. To bring scholars, historians, migrants, lawyers together to explore the power of comics as a tool for civic engagement and activism. To tell a complex story from as many points of view as we can, there is no single way to look at any issue, so a prismatic approach is essential.

4. In South Africa, immigrants and migrant workers are often victims of xenophobic violence. This has made me appreciate how complicated the issue is. Understandably a lot of people seek out South Africa because it’s a comparatively stable African country. But as  a developing country, we still experience high levels of unemployment and poverty. A lot of desperate South Africans see illegal immigrants as exasperating these issues.

Whereas America is a first-world country (although that’s not to dismiss its own issues with poverty and unemployment.) In your opinion, what is the emotional  source of American xenophobia?

MC: First allow me to respectfully push back against the question. In the U.S. the term “illegal” immigrant is a misnomer. Crossing the border is not a felony nor is seeking asylum. So called “illegal” immigration is a misdemeanor, punishable by small fines and at worst a short detention. By using vitriolic language, such as “illegal”, rapists, gang members etc, the current administration has stoked the flames of xenophobia on the right. They are engaging in crimes against humanity.  These crimes stokes the anger on the left. And the band played on…

5. Do you feel that xenophobia and resentment toward immigrants (both legal and otherwise) is used as a political tool and how could we prevent  it being used as such? Do you think that people need to better education regarding the issue?

MC: Absolutely. We can’t prevent it, but we can certainly call it out when we see it. We can engage those who would use it as a tool. We can educate ourselves and others. Most importantly, we have to stop caring what racists think. What I mean is that at a certain point, we have to realize when we are screaming at a wall and switch to something that is malleable. When we focus all our energy on the extremes, we miss out on helping those who are close by and willing to learn. We aren’t going to change the Stephen Millers, the Richard Spencers, the Mel Gibsons. We can find young people, disenfranchised people and others who are searching for an identity and something to believe in, and bring them into the fold.

6. How can writers and artists become involved in the Borderx project? And how can the public best support the project?

MC: Joining the project is as simple as visiting our website at www.border-x.com and the public can support us by pledging to our crowdfunding campaign, links are on our website. Tax-deductible contributions will support migrants in need by providing water, search and rescue and forensic recovery through the South Texas Human Rights Center.

Disclaimer: Lee Jacob is part of the Borderx creative team and has contributed artwork to the project.